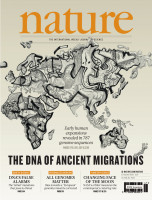 Three international collaborations reporting in this issue of Nature describe 787 high-quality genomes from individuals from geographically diverse populations. David Reich and colleagues analysed whole-genome sequences of 300 individuals from 142 populations. Their findings include an accelerated estimated rate of accumulation of mutations in non-Africans compared to Africans since divergence, and that indigenous Australians, New Guineans and Andamanese do not derive substantial ancestry from an early dispersal of modern humans but from the same source as that of other non-Africans.